FAULKNER’S GO DOWN, MOSES by the Dallas Institute 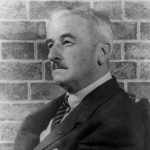 Largely neglected by academic scholars and hardly taught in secondary schools because of their racial content, William Faulkner’s nineteen novels, the last published in 1962, nonetheless have much to say about America today. Faulkner was a consummate storyteller possessed of a prophetic imagination, through which he glimpsed the future of not only his native South but the entire nation as well. The most powerful expression of his prophetic sense is Go Down, Moses, the 1942 epic novel depicting America as the new Promised Land, the derailing of its high ideals, and the unlikely source of its true strengths for the future. It paints with an indelible brush the disastrous stain of ownership—of both land and people—that marked our founding and still haunts us today.

Online registration has closed; late enrollment is possible by calling 214-981-8822 or emailing registrar@dallasinstitute.org